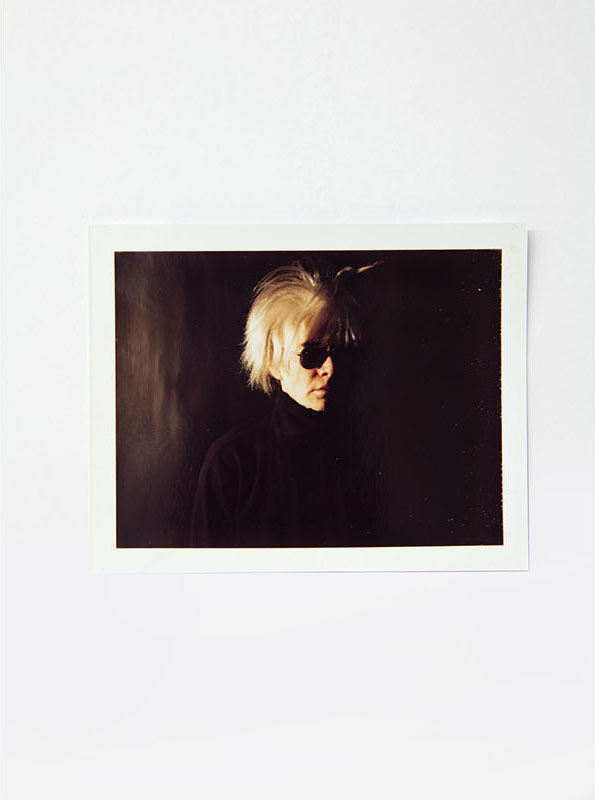 Photography played an important part in the life of Andy Warhol. Young Andy greedily collected images of Hollywood celebrities and their timeless glamour inspired his own work. Warhol started his art career using photographs of famous people such as Marilyn Monroe and Elizabeth Taylor to create a series of silkscreens that stormed the world. Andy Warhol brought his camera with him throughout every journey. During his life, he developed hundreds and thousands of photos. At the time of his death, only a small percentage had been printed. He created a new visual language from a photographic vocabulary, like other influential artists of the 1960s, well before the world of art understood the importance of the medium. The New York exhibition “Andy Warhol Photography: 1967-1987” at the Jack Shainman Gallery in Chelsea presents a series of gelatin silver prints showing the most ordinary moments in his random daily practices, as well as the artists’ Polaroid portraits, still-life, and nudes. Many of the 193 pieces were rarely used. The most fascinating aspect of the exhibit is seeing … Rooted in Detroit and based in New York, Anna Sui is the current cult designer and fashion icon to be exhibited at the Museum of Arts and Design. She became part of the New York socialite and global pop culture in the 90s. Her sensual fashion designs and artistic 60s hippie vibes make her instantly recognizable and famous worldwide.  Sui’s fashion always goes the extra mile, sampling and drawing inspiration from movies, music, history, cultures, and literature. These elements are blended into the designer’s fascination for different historical periods. Sui has a natural drive to experiment with different materials and pop-culture references in her repertoire. During her extensive career, Anna Sui created a unique aesthetic with many noteworthy hits such as Japanese handkerchief and qipao dresses, combining artistic poles and filters to create narratives of different bits of cultures.  Grunge, hippie, rockstar and hula fashion are only a few of the frames-up that one can appreciate from Sui’s narrative, but it is all part of her expression, of the artistic process. The exhibition debuted in … “Ten Monkeys and a Dolphin: Banksy & KAWS.” the auction house opens with a show of 19 pieces by the last decade’s most celebrated street artists. —January 14th at PHILLIPS X in New York. The story of KAWS begins in NYC, Brooklyn and its surroundings packed with skateboard and street art crews. During the early 1990s, Brian Donnelly selected KAWS as his nickname to cover city streets and it wasn’t too long until he became a recognized star in the urban art and graffiti scene. A long way since trading spray paint for fine art, explorations spanned through sculpture, painting, and collage. The exhibition brings together two of the last decade’s most celebrated street artists. Banksy and KAWS art for sale, including rare paintings, screen prints, and sculptures. The show aims to create a dialog between these two controversial artists, through their own disruptions and interpretations of the current social and political climate.  KAWS, which exhibits and sells internationally and most often in Asia, Europe and the United States, has attracting mass media appeal and … 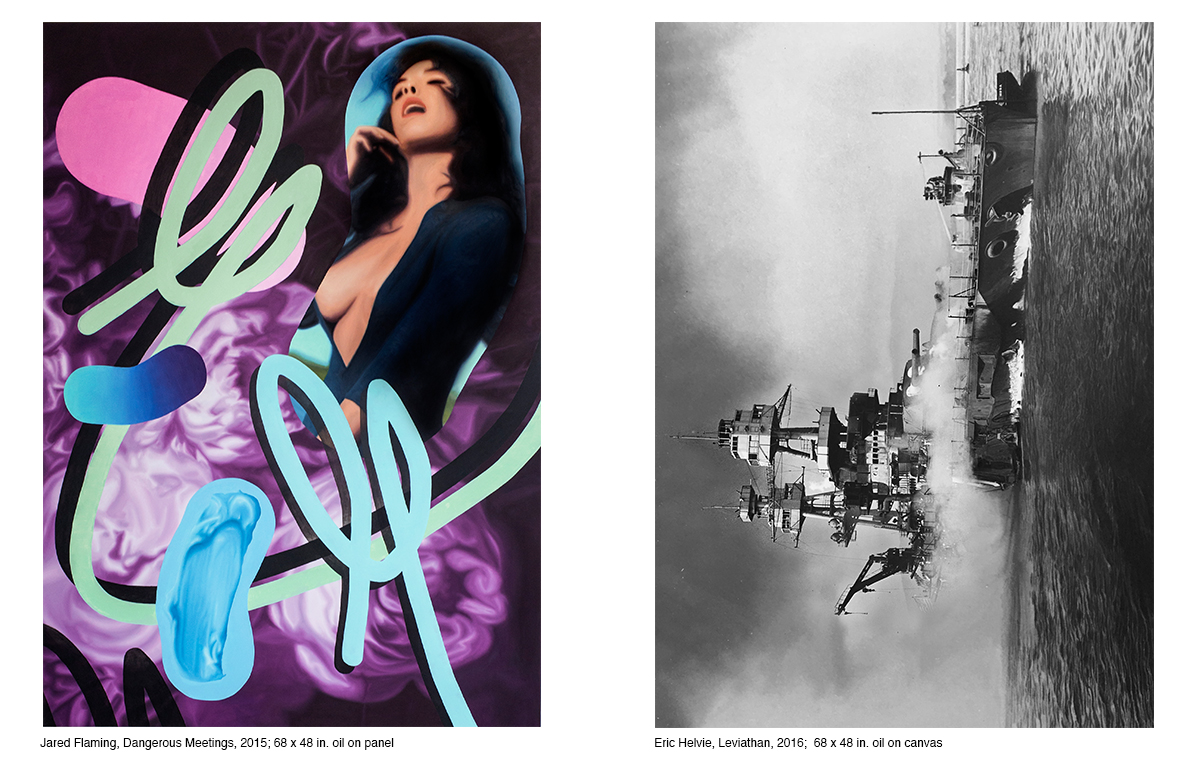 “One Or The Other”, on view from May 17 – 21, 2016 at The Highline Loft at 508 West 26th Street, brings together the two artists Jared Flaming and Eric Helvie, in a pairing of photo-realistic works that focus on the ideas of pop culture, media and storytelling in an effort to dig deep into the subconscious mind to find inspiration and artistic creativity. Curated by Anne Huntington and Natalie Kates, both artistsʼ photo-realistic works, juxtaposed by color, black-and-white metaphor and iconography, embrace the psychoanalytical idea of unconscious desires via subliminal images. In concert with the 4-day show, Huntington and Kates will present a series of experiences to enhance the exhibition, including a Panel discussion with the artists (May 18th) and VAGA hosted opening (May 19th) Q&A with artist Jared Flaming Tell us a bit more about you and your beginnings as an artist. Well I am a born and raised Oklahoma boy. There wasn’t much art around growing up but there was a lot of craft and I always enjoyed that and spent a lot of … TAKASHI MURAKAMI, Gagosian Gallery New York “In the Land of the Dead, Stepping on the Tail of a Rainbow” November 10, 2014 — January 17, 2015 ” To me, religions are a narrative…Natural catastrophes, earthquakes, are things caused by nature. Such chaos is natural, but we have to make sense of it somehow, and so we had to invent these stories. That is what I wanted to paint,” –Takashi Murakami

Multi-faceted artist Martin Gutiérrez is currently showing at RYAN LEE GALLERY, New York (through Aug 16). The exhibit entitled, Martin(e), is the artist’s first solo exhibition. Through photography, video and performance, Gutierrez showcases his “declaration of personal transformation that upends conventions of race, sexuality, gender, and class.” (continue from previous slide) The three part series of videos entitled Martin(e) Pt. 1-3, examines insouciance and dejection through “interlaced vignettes which weave in and out of hypnotic, dream-likes scenes, with reality, revealing a melancholic quest for survival that draws equivocally from the genres of architecture, history, and popular culture.” Gutiérrez also creates a visual wonderland of metamorphose and thought provoking scenarious through a 16 piece photo series entitled Real Dolls. In homage to the Real Doll phenomenon of life-size sex dolls, the artist translates the archetypal roles of four sex doll personas: Ebony, Luxx, Mimi, and Raquel. Casting himself,  Gutierrez describes his compositions as “orchestrated to mirror each doll’s owners desires, combining beauty with the bizarre, elegance with the extreme, and camp with the classical.” The artist is the …

Canadian painter Kris Knight is currently showing at MULHERIN + POLLARD, New York (through May 5). With “Secrets Are The Things We Grow” the artist paints a cast of characters who consciously conceal aspects of themselves from those around them. They hide truths of who they are, where they come from and whom they love. They fear shame, rejection, gossip and embarrassment. They whisper stories but never want the story to be about them… Image credits: Blue Ribbon 18″ x 24″ More images… Secrets have roots, they have currency, they accumulate and grow with time; some are short lived, while others haunt generations. Knight’s character’s front, they put on airs, and they pass; some bluff while others reveal their confessions without saying a word… Image credits: Bear Skin 30″ x 30″ More images… Image credits: Two Stripe Captain 30″ x 40″ Stemmed from personal stories, these young men isolate themselves from those around them. Some of Knight’s portraits appear as islands, while other paintings portray the bonds formed when secrets are revealed to those held closest. Within these portraits …

Brooklyn-based street artist Bast has been an intricate part of the street art scene for the past 10 years, with his wheat-pasted images prominently featured across New York and Europe’s urban landscape. Long before street art became a part of the mainstream, Bast was setting the tone and raising the bar with his iconic collaged imagery. He has established himself as one of the most respected street artists of our generation. As fellow artist Banksy says, “The work isn’t so much a ‘melting pot’ of culture as a food blender set on max and left until the motor burns out.” In this editorial, portraits by photographer Walker Brockington are BASTardized (deriving from more than one source or style) by the elusive artist. –Words and interview by Natalie Kates. Natalie Kates: I’ve seen your street art pieces signed both Bast and Basto? Which do you prefer, and where does the name come from? Bast: I prefer Basto. It’s a long story but basically R.B. (Repulsive Bastard), a heavy metal graffiti guy from Brooklyn’s South Shore High School …