Historically, towns and city centers were organized around a sacred building, all roads leading to some chapel, church, or cathedral, which were the orbit around which Medieval life orbited. These buildings were designed to evoke a sense of awe & rapture – vaulted ceilings and flying buttresses, as sacred choirs filled the monolithic space with their cries to God.

Love Streams, the excellent new LP from influential ambient composer Tim Hecker, begins with the simple, but convoluted, question: “What might liturgical music sound like, in the Modern Age?” Or, as he cheekily phrased it during the promo cycle “liturgical aesthetics after Yeezus” or “the transcendental voice in the age of auto-tune.” 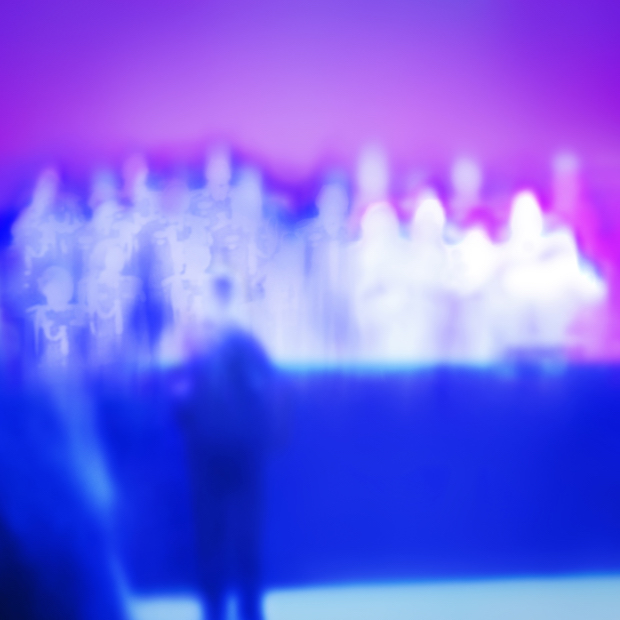 The human voice is at the center piece of Love Streams, with Oscar-nominated soundtrack composer Johann Johannsson composing chorales in Latin for an Icelandic choir. Not content to approximate some modern Renaissance forgery, Johannsson reversed the Latin script, before giving it to the Icelandic Choir Ensemble, which were further re-arranged and edited in post-production. These vocal compositions were then fleshed out with flutes, woodwinds, organs, bright synths, and of course, lots and lots of digital processing, via powerful tools like MAX/MSP and Reaktor.

Love Streams imagines what it might sound like, if the sacred buildings at the center of our communities were entirely digital. It’s like a Vaporwave High Mass, with traditional classical music meeting giltched out Big Data streams, in a nod to the album title, and central conceit.

The title refers to a world that streams more than it loves. That’s obsessed with capturing data, but being unable to give it meaning. It’s a criticism of art as product. Surely, the acts of the imagination and the edification must mean more than being some future plastic island, poisoning our oceans?

The garbled voices, while beautiful, in conjunction with the seemingly-random digital textures definitively places Love Streams as part of the Vaporwave continuum, commenting on the Digital Age we’re living in. If you were to consider Oneohtrix Point Never‘s R Plus Seven or James Ferraro’s Hell NYC as the nightmarish dank tunnels, plunging into the dark depths of the now external collective unconscious, Love Streams would be a crystal cathedral standing at its center, like Crystal Tokyo, backlit against a sky full of data constellations.

Being concerned with the digital, Love Streams is a bit less hissy and crackly than the works Hecker is best known for, most notably the critically-lauded Virgins and Ravedeath, 1972. The melodies are a bit clearer, brighter, like on album opener “Obsidian Counterpoint”, which features clean, purely electronic synth arpeggios. It’s a departure and a new texture from Hecker, adding to his already dense textural pallet.

Unlike traditional “classical music”, there doesn’t seem to be a forward-thrusting narrative at work here. Instead, each song seems to exist as an independent island, floating in the data sea. This makes segueing between tracks approximate the hyperreal world we’re living in, full of surprising jump cuts and hidden connections.

Love Streams is a slightly brighter sounding record for Hecker, who can sound rather grave and dour, even with the collaboration of beastly Noise Guru Ben Frost, with whom Hecker is close friends. That being said, most of Hecker’s trademarks are still present – the hissy, breathy pneumatic expulsions, that sound like great pipes belching out landscapes in some blasted landscape; the gigantic, endless organs, droning into infinity; the leaden beats that crash like some portent of doom. In this way, Love Streams is both a continuation and a departure for Hecker, which should satisfy the composer’s adventurous fans.

In a recent interview with Rolling Stone, Tim Hecker talked about the challenge of working with digital textures. “I think the risk of doing digital audio in this time, is, like, when does technology become like shitty CGI? When does it become like Michael Bay Transformers of sound? That’s taste, and that’s a judgement you can’t teach.”

While a lot of the electronic music underground are retreating entirely from modern technology, working in an entirely retroactive ’60s/’70s format (look at the resurgence of modular synths and live analog techno, for example), Hecker urges us to keep pushing, keep our ears open, and continue to refine our tastes. This is how we prevent music from becoming toxic plastic islands.